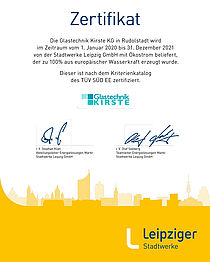 Glastechnik Kirste KG is contributing to CO2 reduction and the improvement of Thüringia’s environmental performance by purchasing green energy.

The history of the production site

The glass industry has a long tradition in the Eastern German state of Thuringia. Our company's history begins in 1836 at our production site in Remda.

In 1910, the company started to manufacture glass products, specializing in syringe cylinders.

Despite vast destruction during World War II, we were able to restart our production in December of 1945. A high demand for medical devices fueled the production of glass syringes, syringe cylinders, and other medical glass products. By 1965, the company had manufactured over 2.5 million syringes. Because of the forced nationalization of all industries within the former GDR, our company was renamed "VEB Glasbearbeitung Remda" in April 1972 and soon after became a subsidiary of the "Jenaer Glaswerk Schott & Gen." in August of the same year.

Production in the GDR

In further development, the product range was extended to different goods. In addition to the tubular and flat glass, processing products in the field of technical and optical glass heat filter were made.

Mr. Gerhard Kirste, who had run as a successor to his father's business for a long time, retired in 1986 from the State companies and founded, in Eichfeld, a successful craft business for the manufacturing of specialty glass products. At this time, leading products were precision vials made of glass for use in bubble levels and geodetic instruments. These were produced by a specially developed method by Gerhard Kirste. In particular, the high precision and repeatability in the manufacturing process were important criteria as the main customer was Carl Zeiss Jena as an exclusive supplier.

With the demise of the former GDR, the desire arose to take over and to carry on his father's business.

The buyback of the company in 1990 allowed the company to start anew at their Remda location. With a history of nearly 20 years under the socialist command economy, the company faced some difficulties at the beginning. Gerhard Kirste's passion and commitment helped the company to gain a strong market position, despite initial challenges.

Today, our company has gained a reputation as being a reliable partner in precise components and special glass instruments. The two sons - Bernd and Thomas Kirste - took over the management of the company in January 2000. They strive to keep up the company's tradition.